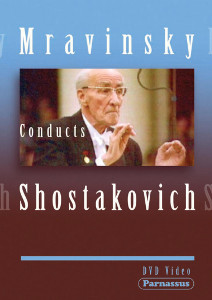 For decades Evgeny Mravinsky and his Leningrad Philharmonic Orchestra
maintained a standard of playing which was otherwise unknown in the Soviet Union. The conductor’s reputation and that of his orchestra were widely known throughout the music world.

It is not surprising that Mravinsky was entrusted with the premieres of many major works by Soviet composers. Among these were six of Shostakovich’s Symphonies, three of which–Nos. 5, 8, and 12–are included on this video. No. 8 was dedicated by the composer to Mravinsky.

This conductor and orchestra have been very widely documented on audio recordings. However, their video legacy is very scant. None of these videos has ever been available in any Western country, and none has been available anywhere for decades.

Although the video quality of these recordings is limited by Soviet technology of the times, they have been subjected to expert restoration by Chris Andersen of Nevessa Studios. Fortunately their audio quality is highly satisfactory. The discs are not region encoded and should be playable anywhere.

This article originally appeared in Issue 40:1 (Sept/Oct 2016) of Fanfare Magazine. One of the best, and best-known, of the stories about Fritz Reiner that circulate around the Chicago Symphony Orchestra is of the photography session intended to get some good publicity shots of the famously dour conductor. Near the end, the photographer is reported to have said, “Dr. Reiner, couldn’t you just smile for one picture?” Reiner’s wife Carlotta is alleged to have said, “He is!” I have no idea if a similar story is told about Yevgeny Mravinsky, but it certainly could have been.

This is an extraordinarily important video release, and Parnassus has done a lot to clean up the sound and the picture from Japanese VHS tape originals. The dates and origins of these three performances are unclear. I communicated to Leslie Gerber, the proprietor of Parnassus, and he did a fair amount of research but could not find dating information. The Fifth and Eighth Symphonies seem to be performances staged for Russian television. The Leningrad Philharmonic’s glorious hall is clearly the venue, but there is no audience present. The orchestra (virtually all-male) is dressed in dark suits, and Mravinsky in a white shirt. The 12th Symphony was a telecast of an actual concert performance from the same venue. The picture quality on all three is more than adequate for historic material of this nature, and the sound is a bit on the dry side but also easily listenable for anyone who has heard 1950s and 1960s Russian recordings. At first, I thought all three were monaural, but there was more openness to the Eighth, and on rehearing it I began to feel it was stereo, which was then confirmed by Leslie Gerber. (I heard it on speakers, not headphones.) Given the relationship between conductor and composer (Mravinsky conducted the world premieres of six symphonies by Shostakovich, including all three included here), the important nature of this release is self-evident. (The relationship was irreparably damaged when Mravinsky refused to take the political risk of conducting the premiere of the 13th, “Babi Yar.”)

What impresses about the performances here is the level of intensity of the orchestral playing despite what appears to be a lack of intensity visibly communicated by the gestures of the conductor. One sees the power of his gaze (like Reiner, much of his conducting is done through the eyes), but his face remains expressionless for much of the music. The work was clearly done in rehearsal, and the musicians needed no external prodding to demonstrate their commitment to the music.

The Fifth, to be candid, is the least strong of these three performances, and it still has much to offer. The string playing is remarkable in its consistency of intensity and its accuracy. What is not quite there to the degree it is in more successful Mravinsky recorded performances of this work (as well as those by other great conductors) is the sly wit of the second movement and the depth of feeling, the bleakness, that should subsume the slow movement. One gets the feeling that Mravinsky may have led this work just a few times too many, and the edge seems dulled off. Still it is gratifying to watch his mastery of the music, his clear knowledge of the score, and his command of the orchestra. It is only when compared to the greatest of performances (including some of his own, or those by Rostropovich, Bernstein, Mitropoulos, and a few others) that this falls a bit short.

The Eighth and 12th Symphonies are masterful performances in every way. The huge emotional range of the Eighth is particularly well captured here. The grandeur and tragedy of the first movement, the biting sarcasm and even anger of the middle movements, the bleakness of the finale, all of that is painted brilliantly by conductor and orchestra. The impact of Mravinsky’s rare moments of demonstrating the power he wants with his face and/or body language is immense, and the orchestra responds accordingly. The longer we watch, the more we understand the unique communication that takes place between this conductor and the orchestra he led as principal conductor for 50 years, and the more we also understand his deep knowledge of this music. The Eighth Symphony can sprawl, but in this taut but never rigid performance it seems to be less than its hour-long duration. This is a particularly powerful experience, and would alone be worth the price of the disc.

The performance of the 12th comes closer than any other to convincing me that this is a worthy symphony. Even after enjoying the experience of this performance a couple of times, I wouldn’t rank this in the top tier of the composer’s output. But Mravinsky, because of the sincerity of his belief in the score and his skill in reducing bombast but maintaining the music’s power, does make one appreciate Shostakovich’s skill. Because this is a performance given in front of an audience, one sees just a bit more physical demonstrativeness from the conductor, but only a bit.

This entire disc is a vivid demonstration of how much variety, power, intensity, and commitment a conductor can elicit from an orchestra without showing a great deal externally. That is not a claim that this is the only way to lead an orchestra—I admire Leonard Bernstein as much as I admire Yevgeny Mravinsky. But as a demonstration of an old master working his craft at the very highest level, this DVD is extremely valuable. I would not be without it in my collection. Henry Fogel

Parnassus Records are distributed in the U.S. by E1, in Italy by La Tosca, and elsewhere by alto distribution.