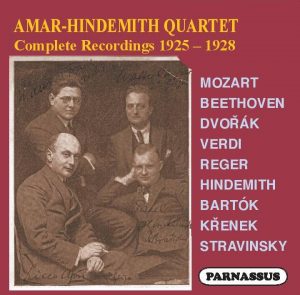 
In addition to being one of the outstanding composers of the 20th century, Paul Hindemith was long active as a performing musician. Trained as a violinist, he eventually settled on the viola as his main instrument. He was also said to be able to play any instrumental part of any work he composed. As a conductor, his repertoire ranged from Monteverdi through Berg in addition to his own works.

In the 1920s, Hindemith became a member of a successful string quartet, lead by Turkish violinist Licco Amar. Hindemith’s cellist brother Rudolf was a member of this ensemble through most of its existence. In 1925, when the quartet had already toured Europe and given dozens of performances, it began its prolific although brief recording career. Between 1925 and 1928, the Amar or Amar-Hindemith Quartet (known by both names at various times) recorded about four hours of music, including two versions of Hindemith’s most popular string quartet (his No. 4), along with works of Mozart, Beethoven, Verdi, Reger, Bartók (the first recording of any of his major works, the Second Quartet), Stravinsky, and movements from Krenek, Dvořák, and Mozart.

This set presents the ensemble’s complete recordings for the first time; fewer than half of them have been reissued previously. The previous reissue of the Bartók Quartet was made from damaged originals; the new edition is free of such flaws. The set presents a vivid portrait of a major composer and his colleagues performing the works of other composers with directness and great insight.

Amar-Hindemith Quartet reviewed at MusicWeb International
… This is a, attractively produced and presented with cast-iron quality control. It’s presented moreover at a ‘special price’ which should prove an added inducement to those curious about this pioneering group, whose interpretation of cutting edge music illuminates, not least because of Hindemith’s structural insights, and is here brought to renewed life with such care. – Jonathan Woolf
http://www.musicweb-international.com/classrev/2020/Nov/Amar-Hindemith-PACD96070.htm
Amar-Hindemith Quartet made the MusicWeb International Records of the Year list : pdf here

The American label Parnassus has prepared a nice surprise for us: the rare recordings, complete for the first time, of the Amar-Hindemith Quartet, with Paul Hindemith playing the viola and his brother Rudolf on the cello.

Amar-Hindemith_Parnassus QuartetBesides being one of the most important composers of the XX th century, Paul Hindemith has long been active as a musician. Trained as a violinist, he finally chose the viola. In the 1920s, he became a member of the Amar-Hindemith Quartet conducted by the Hungarian violinist Licco Amar. With this training, Hindemith can not only play music and thus improve himself as a chamber musician, but also, and perhaps above all, give his scores in concert.

In 1925, while the quartet had already toured Europe, it began a series of recordings, spanning the years 1925-1928. If, during this period, the two violinists and the violist did not change, Rudolf Hindemith – the cellist in the engravings made for Polydor from 1925 to 1927 – was replaced by Maurits Frank appearing in the two recordings made for Parlophon in 1928: the Menuetto & Trio – Allegretto extract Quartet for strings K. 421 and the Andante extract Quartet for strings K. 575 by Mozart.

The 1925 engravings are acoustic, while those of 1926 and 1927 were made by the “Beam of Light” process, an electrical system difficult to adjust and unreliable, which produced unsatisfactory, barely distinguishable results. records using prior technology [1] . Only the two Mozart movements captured in 1928 were performed with the Western Electric system, the most efficient and the best at the time. Given this, Mark Obert-Thorn’s input into this production is invaluable. Its transplantings are based on the original 78 rpm records in good condition.

The discographic repertoire of the Amar-Hindemith Quartet combines classical pages (by Mozart, Beethoven), romantic (Verdi), post-Romantic (Dvořák) and contemporary (Bartók, Stravinsky, Paul Hindemith himself). The interpretations of Hindemith’s own works are especially valuable because, with them, one can be sure that they unfold according to the composer’s intentions. Both of executions Quartet to string No. 4 op. 22 (an acoustic recording and an electric recording) are similar, as dark as they are intense. That of the trio to strings No. 1 op. 34 (with Walter Caspar on violin) is distinguished by the sharpness of movement in the Toccata , as well as by the smoothness of the Langsam und mit grosser Ruhe . Furthermore, in reading the Trio for strings No. 1 op. 77b by Reger, the clarity of the textures is remarkable; associated with the eloquence of the speech, it allows to revel in the subtleties of the harmonic language of this score.

The playing of the Amar-Hindemith Quartet has not aged a bit, and has been for almost a hundred years! Much more than that: the interpretations given turn out to be resolutely “modern”, if we approach them through the prism of the history of the twentieth century string quartet. On the one hand, they are adorned with the variety of atmospheres; on the other hand, they impress with the rhythmic precision and the conciseness of the subject. The implementation of the Quartet for Strings in E minor by Giuseppe Verdi is a good example, combining as much tenderness as brilliantly, tension and humor. Then that of the Quartet for Strings No. 2 of Béla Bartókattracts our attention by the simple fact that it is, if I am not mistaken, the very first engraving (from 1926) of a work by this composer. No interpretive tradition guided the chamber players through their performance, sometimes imbued with mystery and austerity, sometimes with ardor. Their playing emphasizes the contrasts of tempo and nuances, favoring the fluidity of phrasing as well as expressive depth.

Let’s also listen to the classics, Mozart and Beethoven. Taking into account the playing characteristics of the Amar-Hindemith Quartet, we are dealing with readings brimming with spring freshness, light, both brilliant and tense, combining seriousness and good humor. In the Bonn master’s Duo for viola and cello WoO 32, we hear the Hindemith brothers conducting a dialogue with musicality, frankness and refinement, warm and full of virtuosity, imbued with gaiety and magnified by the flexibility of the movement as by the plasticity of lines.

This box set is a living portrait of a notable composer, his brother and his colleagues, who perform chamber music with a vein comparable to that of the greatest groups of this type.

[1] For the “Beam of Light” process, an acoustic horn concentrates the sound waves on a diaphragm which carries a mirror. The movements of the mirror deflect a light ray of which a greater or lesser portion of the width more impacts a photoelectric cell generating an electrical signal, which in turn makes it possible to actuate the engraver of the 78 rpm matrix.

Reviewed in October 2020 by Richard Kaplan
Published in the January/February 2021 issue of Fanfare.

The Amar-Hindemith Quartet, also known simply as the Amar Quartet, was formed in 1921 for a performance of Paul Hindemith’s op. 16 Quartet; its founding members were violinists Licco Amar and Walter Caspar, violist Paul Hindemith, and his brother, cellist Rudolf Hindemith. The latter was replaced by Maurits Frank for a few years early on, and again in 1927. Paul Hindemith left the group in 1929, and it disbanded in 1933. The quartet recorded for the (Deutsche) Grammophon company and its export label Polydor from 1925 to 1927, with Rudolf Hindemith as cellist, and made two additional sides for Parlophon in 1928 with Frank (the single movements from Mozart’s Quartets in D Minor and D Major, K 421 and 575). In addition, Caspar and the Hindemith brothers recorded trios by Reger and Hindemith as the Amar Trio, and the two Hindemiths recorded duets by Beethoven and Hindemith in 1925.

The 1925 recordings—in addition to the duets, the first version of Hindemith’s op. 22 and the single movements by Křenek and Stravinsky—are acoustics; the Hindemith Quartet was remade electrically the following year, along with quartets of Mozart (F Major, K 590) and Verdi, with single movements by Mozart and Dvořák as fillers. These recordings were made by the Brunswick “Light Ray” process, a Rube Goldberg setup using a tiny mirror and photoelectric cells, and if the truth be told, the sound isn’t much better than that of the acoustics; in particular, there is a shrill edge to the violin sound that even Mark Obert-Thorn’s expert transfer techniques can’t eliminate entirely. By 1927 Polydor had adopted Western Electric’s microphone technique, and the recordings from that year—the complete version of Mozart’s K 428 in EI, Beethoven’s op. 95, and the two trios—are easier to listen to. Curiously, the two 1928 Parlophon sides are inferior in sound to the 1927 Polydors. Precise recording dates are unknown, but the runs of consecutive matrix numbers strongly suggest that each year’s recordings were for the most part made in single sessions or groups thereof.

As far as I have been able to trace, all the recordings here save some of the single movements were first recordings; of course, much of the repertoire was new music at the time. Tully Potter’s notes—a slightly abridged version of his notes for an Arbiter CD of three of the 1926 items—give an impressive list of contemporary composers whose music the Amar performed. (Editor’s Note: Tully Potter’s complete notes are here) The recordings are given here in chronological order of composition, with the exception that the two Parlophon sides are placed at the end as an “appendix.”

Potter rightly observes that “The performances on these discs have one thing in common: they are almost shockingly direct.” Amar doesn’t have the sweetest tone, but ensemble is by and large excellent. Mozart’s K 428 and 590—the latter in rather dim sound—are given straightforward readings. Repeats are taken where the lengths of the 78 rpm sides permit. The quartet really digs into the first movement of Beethoven’s op. 95, and in the “Eyeglass” Duet Paul Hindemith shows that he can get around the viola.

The most attractive performance in the set may be that of the Reger trio: Caspar has a somewhat more pleasant sound than Amar, and this and the incomplete Hindemith trio from the same session benefit from the better 1927 sound. The two versions of Hindemith’s op. 22 are very similar; Potter tells us that this was the quartet’s most frequently-played work. Bartók’s Second Quartet receives a sympathetic but quite broad reading, with a duration of 34 minutes; Potter points out that it was “the first recording of any major work by this composer.”

This set was transferred almost entirely from 78s from my own collection, so I can vouch for the fact that Obert-Thorn has coaxed every bit of sound from the grooves. Surface noise is audible, of course, but subdued, especially in the later recordings. A sampling of the earlier Arbiter CD shows exactly how remarkable Obert-Thorn’s transfers are: by comparison, the former sounds shrill and noisy.

This set is of enormous historical, and considerable musical, value; most of the recordings are being issued in extended-play format for the first time. Most highly recommended.