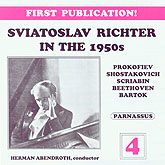 This set was recorded at Moscow recitals in 1954 and 1956. the obvious highlight of this set is a 1954 performance of Beethoven’s Third Piano concerto conducted by Herman Abendroth, during a visit to Moscow. It was Richter’s only performance with Abendroth, and it crackles with intensity. The other material is Prokofiev’s Sonatas Nos. 6 and 9 and Gavotte from Cinderella, eight of Shostakovich’s Preludes and Fugues (the largest group Richter ever played at one recital), Bartók’s 15 Hungarian Peasant Songs,, and Scriabin’s Vers La flamme and Poème. All of the recordings are previously unpublished.

Richter was the most versatile and the most consistently interesting pianist of the 20th century, and little that he recorded during his long career is not worth hearing. […]
The Parnassus release will be more interesting, at least to Richter connoisseurs. Here, too, of course, we have repertoire readily available in other Richter recordings. But the original tapes come from a period in Richter’s early career (1954-56) that’s sparsely documented. In fact, nearly all of these performances are the earliest Richter accounts of these particular pieces that I’ve come across. They thus contribute to our appreciation of his development in a way the BBC set does not.
Parnassus’s set would have been even more welcome a few months ago, before RCA issued Richter’s 1960 Carnegie Hall performance of the Prokofiev Sixth: Good as Parnassus’s 1956 performance is, it lacks the electrifying concentration of the slightly later reading. Still, it would be hard to overestimate the attractions of the playing elsewhere. Parnassus’s publicity calls the Beethoven Concerto the “obvious highlight“ of the set; and this zesty reading—the outer movements bold, but without the aggression that marks much of Richter’s early Beethoven; the Largo memorable for its calm nobility—certainly lifts your spirits in a way that makes Richter’s familiar EMI performance with Muti seem tepid and disengaged. But I was even more taken with the Bartók (arguably even more colorful and flexibly improvisatory than his excellent account from the early 1970s)—and the Shostakovich is better yet. This is, according to Parnassus, the largest selection of these Preludes and Fugues that Richter ever performed at a single recital—and its cumulative effect certainly has something to do with the way Richter manages to weld eight very different diptychs into a single span that grips you for 43 minutes. But’what’s even more striking than his sheer architectural prowess is his ability to coax out the music’s dark undercurrents: the obsessive reticence of the Prelude No. 4, for instance, or the private but restless despair of the Fugue No. 6 or the manic nonchalance of the Fugue No. 15. As for the other large work, the Prokofiev Ninth: This score often sounds pallid in other hands, but Richter, who premiered it, has always given it exceptional stature by illuminating its paradoxical combination of timidity and temerity. Yet even this performance is hard to remember when it’s followed by the stark concentration of the Shostakovich.
A bit of aggravating crosstalk aside, the sound is, as on the earlier installments, better than you might expect from the sources, and the brief notes certainly won’t be a barrier to fans of the pianist. It’s unfortunate that Parnassus has mislabeled the Scriabin Poème (what’s claimed as op. 32/1—a work that, I believe, would have been new to the Richter discography—turns out to be op. 52/1). All in all, though, a substantial addition to the catalog.
Peter J. Rabinowitz
This article originally appeared in Issue 26:1 (Sept/Oct 2002) of Fanfare Magazine.