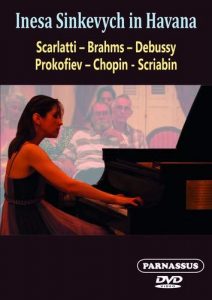 Inesa Sinkevych is a Ukrainian-born pianist now living in New York, where she teaches at the Manhattan School of Music. Winner of many competition awards, she has played with the Minnesota Orchestra, the Israel Philharmonic, and the Gulbenkian Orchestra of Portugal, among many others.

Among her performances have been concerts at Weill and Merkin Recital Halls in New York, Mann Auditorium in Tel Aviv, the Purcell Room in London, the Palau de la Música Catalana in Barcelona, and Hong King City Hall. On the visit to Cuba where she gave the present recital, she also played with the Orquesta Nacional de Cuba. She has toured China and played in many other venues in Europe and the United States.

Sinkevych’s CD of Schubert piano music, including the great Sonata in A Major, was selected as a CD of the month by Music Web. Reviewer Guy Aron called her “a Schubertian of real distinction.” In addition to solo performances, Sinkevych is a member of Trio Tartufo, with flutist Jessica Aura Taskov, and the Astraeus Duo, with violinist Anat Malkin Almani.

Parnassus is proud to present Inesa Sinkevych, a worthy addition to our catalog of distinguished musicians, in a high-quality video from Cervantes Hall in Havana, where her program includes two of the greatest challenges in the piano repertoire, the Sonata No. 3 of Brahms and the Sonata No. 6 of Prokofiev.

This article originally appeared in Issue 42:5 (May/June 2019) of Fanfare Magazine.
I am greatly impressed by Inesa Sinkevych. I am so tired of the hype about Lang Lang, Yuja Wang, and Daniel Trifonov that it is wonderful to encounter a young pianist one need not feel cynical about. Born in Ukraine, raised in Israel, and having received her doctorate from the Manhattan School of Music, where she now teaches, Sinkevych is that rare virtuoso who achieves a perfect blend of heart and mind. She can produce a huge sound without ever banging, unlike the Chinese virtuoso “Bang Bang.” Indeed, when did concert audiences start to think it was a rare moment of excitement to hear a pianist bang? Sinkevych in the present recital approaches a broad repertoire with an appropriate sense of style for each composer. Mischa Maisky has said that Martha Argerich is the most intellectual artist he’s ever known, a surprising statement about a pianist who produces so much excitement. Much the same can be said of Sinkevych. Hers are deeply thought out yet passionate performances, sounding like nobody else’s. I can hear an agent saying, “Tut tut, you never will become a star playing a recital of Brahms’s Third and Prokofiev’s Sixth Sonatas.” Actually, they provide a very balanced program, each of them one of its century’s most symphonic statements for solo piano. There almost is an element of hubris in making the piano sound that way—a fact Sinkevych seems highly aware of in the long arcs of tension she finds in these two works. Inesa Sinkevych is a proud exemplar of her art, and this recital shows that she is too powerful to be swayed by the winds of fashion in the so-called “classical” music business.

The Scarlatti Kk 54 Sonata opening the concert demonstrates Sinkevych’s ability to maintain a long line while playing with crystalline clarity. She pays careful attention to the wit from gradations in dynamics in Kk 533. The Brahms’s opening movement mixes heroic grandeur with lamentations. The first slow movement is suffused with Brahms and Sinkevych’s affinity for Schubert. Its B section is filled with haunting, nearly ghostly lyricism. The third movement at times is like dance music gone mad, while its B section provides a foretaste of the First Piano Concerto. In the second slow movement, Brahms creates a sort of arabesque around the motto theme of Beethoven’s Fifth Symphony. The last movement’s B section is heart-rending in its nervous pulsations. Sinkevych’s playing of the coda is hair-raising in its excitement.

A glistening spirit world inhabits Sinkevych’s rendition of Debussy’s “Ondine.” “Ce qua vu le vent d’ouest” here is filled with the brilliantly articulated tumult of the raging atmosphere. From the way Sinkevych lights into the beginning of Prokofiev’s Sixth Sonata, we know we’re in for a thrilling ride. The first movement’s barely controlled savagery demonstrates what provoked the sonata’s early Stalinist critics. The next movement constitutes an eloquent gesture of disgust, despite the composer’s quotes from his Romeo and Juliet. Mahlerian in its harmonic density and intensity, the slow movement also has touches of Debussy’s color. A modern-day reworking of Mussorgsky’s “Baba-Yaga” inhabits the last movement, with a virtuoso descent into wildness and madness. Sinkevych’s accomplishment in the Prokofiev is awe-inspiring. Her Chopin op. 50/2 Mazurka, by contrast, is majestic and refined. The dark, Romantic cravings of Scriabin’s op. 42/5 Étude are articulated stunningly.

The DVD’s video direction is fairly rudimentary, although effective. Seeing Sinkevych produce her tone is quite a wonder. The sound engineering is excellent, sensitive enough to pick up the occasional street noises outside the hall. The Havana audience appears knowledgeable and appreciative. If you are searching for CDs of the two main sonatas, I would recommend Walter Klien in the Brahms and Van Cliburn in the Prokofiev. Inesa Sinkevych, on the other hand, inhabits her own world of artistry and deserves to be considered alongside these two predecessors. Her Havana recital is so fresh in its playing and insights that I don’t believe I’ll ever grow tired of it. Highly recommended. Dave Saemann
Parnassus CDs and DVDs are distributed in the U.S. by Alliance, and elsewhere by alto distribution and associated distributors.