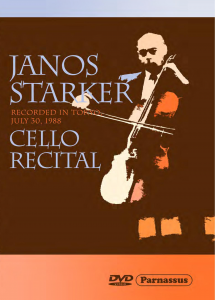 The late Janos Starker, who died in 2013 at the age of 88, was universally acknowledged as one of the greatest cellists of the 20th century. His large discography includes well over 100 CDs. However, opportunities to see Starker in performance on video have been extremely limited, and nothing has previously been available on DVD.

The recording has excellent video and audio quality. It was previously available only in Japan, in the obsolete laserdisc format. It is now reissued in cooperation with the Starker Foundation, which will receive all royalties from its sale.

For the price of a DVD you can have a ticket to watch a great cellist doing what he did best – playing unaccompanied. At least two cameras are on hand to watch János Starker from one side, then the other. Perhaps a third is in use, as every now and again you get a longer shot of him from the back of the hall. Starker, clad in suite and tie, is inscrutable as ever, putting all his effort into his playing, and the audience is very quiet. The colour picture is excellent, as is the sound.

Starker’s Bach was remarkably consistent over the years and through five recorded cycles (the first one incomplete). Here we get his usual interpretation of the C major suite, technically immaculate, rhythmically alive, always tracing an impeccable musical line. The Sarabande is nobly and concentratedly played. He stops after the Bourrée to mop his brow; otherwise the performance is free of incident.

The little Cassadó suite was written in the 1920s for Francesco von Mendelssohn, who was the regular second cellist with the Busch Quartet and played for a time in the Klingler Quartet. The three movements are subtly tinged with Spanish effects and the piece always creates a good impression. Starker recorded it on a Denon LP and his great pupil Tsuyoshi Tsutsumi did it on a Sony CD. This performance is beautifully nuanced and proportioned.

And so to Starker’s warhorse, the superb Kodály solo Sonata that he first recorded in Paris 40 years before this Japanese recital. In the early days he made slight cuts but his final LP version was complete, as is this live performance. Again Tsutsumi has recorded it and you can find versions by Rohan de Saram, Miklos Perényi and Milos Sádlo, to name just three. But surely no one will begrudge Starker his right to be called the King of Kodály. It is one of the great interpretations of our age, displaying formidable technique, including left-hand pizzicato in the second movement, and exceptional rhythmic subtlety. If you think this review is a rave, you are right.
Tully Potter, Classical Recordings Quarterly

Parnassus Records classical CDs are distributed in the U.S. by Alliance and elsewhere by alto distribution and associated companies. If you cannot find them at your favourite record store, please ask for them and please take a moment to email us