Copland: Before the LP 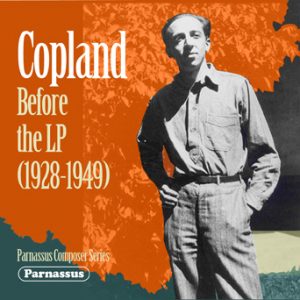 Aaron Copland was active as a pianist throughout most of his musical career, giving up piano performance only after 1970, when he concentrated on conducting. He continued to record performances of his own music through much of the LP era, although only as a collaborator in chamber works and his Piano Concerto.

The present CD collects for the first time all of Copland’s pre-LP recordings. While most of them have been issued on LP or CD before, they have never all been available in one place. Further, they are now presented in splendid new transfers by Mark Obert-Thorn, who was able to locate copies of all of the originals including the ultra-scarce New Music Quarterly side. The piano roll of “The Cat and the Mouse” is published in any audio recording for the first time.

Copland said he had never performed any other composer’s piano music in public. But his technique was strong enough to support the powerful performance of his Piano Variations and, later, of his Piano Concerto. This restoration of his earlier piano recordings is a valuable document of a major composer showing how his own music should go. His collaborators in these recordings include two major violinists, Jacques Gordon and Louis Kaufman, and Copland’s long-time friend and collaborator, the composer and pianist Leo Smit.

Royalties on this CD are being paid to Copland House, an award-winning creative center for American music based at Aaron Copland’s National Historic Landmark house near New York City (www.coplandhouse.org).

Copland Before the LP reviewed at Music Web International

Click here to listen to an interview with Aaron Copland, conducted by Parnassus Records’ Leslie Gerber

Aaron Copland (piano) (in all items)

This article originally appeared in Issue 41:2 (Nov/Dec 2017) of Fanfare Magazine.
Every once in a while one encounters a recording that clearly has historic importance, a recording one is obligated to respect and admire, even though it turns out to be a disappointing listening experience. That is most assuredly not the case here. This compilation, called Copland Before the LP (1928–1949) is certainly historically significant, but just as importantly, it is also great fun. Copland was far more than a competent pianist (when one considers the difficulty of his Piano Variations that is no surprise), and at least as late as these recordings he kept up his chops.

The music here ranges from some of Copland’s most accessible works (Four Piano Blues, for instance) to some of his thorniest (Piano Variations). The only piece I struggled with was the brief (four minutes) Vocalise, sung very well by Otto Luening’s wife Ethel. I tried to find something to hold on to in what seemed like a meandering musical line.

The two separate performances of Two Pieces for Violin and Piano (with Jacques Gordon recorded in 1935, and with Louis Kaufman recorded in 1947) show no diminishment in Copland’s piano skills, but they do demonstrate that Kaufman was the finer violinist. His beautiful tone and mastery of phrase-shaping not only bring these brief pieces to life but also demonstrate that the Sonata for Violin and Piano from 1943 is a major work that should be heard more often than it is.

Throughout the disc we hear the vitality, the rhythmic energy, that marked all of Copland’s music no matter what musical grammar he was operating in. Vitebsk, for violin, cello, and piano, is heard in a particularly persuasive performance. It is a piece that combines the simple appeal of a Jewish folk-like theme with some advanced harmonic thinking, including the incorporation of quarter-tones. This music is a far cry from Billy the Kid and Appalachian Spring. But at its core, like the thorny Piano Variations, Vitebsk is absolutely Copland. His thumbprint is on everything he wrote. The fully engaged, even joyous performances on this disc are a pleasure to hear. Not all composers perform their music with flair, but Copland did.

Parnassus’s reproduction standards have always been very high, and this release is no exception. The first piece, Le chat et la souris, is from a 1928 piano roll and was transferred by the Pierian Recording Society; the rest were restored by Mark Obert-Thorn, thus guaranteeing their quality. Obert-Thorn and/or Gerber must have done a lot of sleuthing to find the quietest 78s, as the surface noise ranges from inaudible to very faint. The excellent program notes are uncredited, but I suspect they are by Parnassus’s proprietor (and former Fanfare reviewer) Leslie Gerber. Here’s a disc that is at once important and rewarding. One cannot ask for more than that. Henry Fogel

Parnassus CDs are distributed in the U.S. by Alliance and elsewhere by alto distribution and associated distributors.