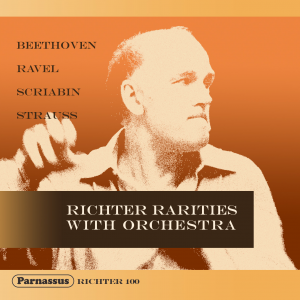 All of these recordings have been published before. But all have become great rarities, and most of the original publications were filled out with extraneous material. Many collectors will find this new edition worthwhile for the Ravel Concerto alone, but the other works are very substantial bonuses.

The Beethoven Rondo was performed on May 8, 1962, as an encore to a program which was made up of Beethoven’s First and Third Piano concertos, the only ones Richter ever performed in public. He recorded the Rondo for Deutsche Grammophon in Vienna the following September. This is the only live performance of this music by Richter we have.

Richter performed the Ravel Concerto for Left Hand with Riccardo Muti conducting in Genova, Italy on June 14, 1969. He performed this work twelve times altogether, but this is the only recording we have of him playing it.

Richter’s affinity for the music of Scriabin is well known. He performed that composer’s music throughout his career. As usual he made his own selections of the pieces he felt special affinity for, but they were voluminous selections. He first performed the piano part of Scriabin’s “Prometheus” in 1972. On April 12, 1988, he revived the work for a single performance, as part of a celebration of the 100th birthday anniversary of his teacher Heinrich Neuhaus. On both occasions the conductor was Evgeny Svetlanov. The performance heard here is that first performance of the work by Richter, April 3, 1972, previously available only on a limited edition CD-R issue from Russia.

The “Burleske” of Richard Strauss is that composer’s only piano composition that remains in the active repertoire, and it is the only music by Strauss that Richter performed. A concert recording from December, 1961, conducted by Gennady Rozhdestvensky, is relatively well known and has been issued numerous times. However, Richter had also performed the piece on September 9–his only concert of that month–in Bucharest, with the eminent Rumanian conductor George Georgescu. This recording was issued in Rumania and on a couple of very obscure private labels.

This article originally appeared in Issue 40:1 (Sept/Oct 2016) of Fanfare Magazine.
Since Sviatoslav Richter’s death in 1997, more in-concert recordings have gotten into print, by far, than for any other pianist. The odds that a particular recording will be successful generally increases the more often he played a piece, giving us more chances for acceptable sound. (The hunt is very hit-and-miss.) But the lowest chances, in my experience, occur with orchestras. Piano and orchestra isn’t an easy combination to record properly, especially if the source is an audience member with a portable, usually hidden, tape recorder. There are times when you have to focus solely on Richter and discount what’s happening around him.

This cautionary note applies in varying degrees to this valuable collection of orchestral rarities from Parnassus. None of the recordings are premieres, but their circulation was generally scarce and limited, so gathering everything on one disc deserves the gratitude of Richter fanciers. We start off with a happy conjunction of good sound and an expert Soviet orchestra in Beethoven’s fragment for piano and orchestra, the Rondo in B♭ from 1793, which was completed by Czerny and published two years after Beethoven’s death. Richter’s account was an encore given at a concert where he had played the First and Third Piano Concertos, the only ones of Beethoven he ever performed publically. Richter was in an exuberant mood, and Kondrashin leads the orchestral part in the same mood.

The positive qualities diminish considerably for Ravel’s Piano Concerto for the Left Hand, which Richter performed a dozen times, this reading in Genoa being the only one caught on tape. Dim sound and distant miking mean that Ravel’s dark, subterranean opening goes for almost nothing, and the piano’s splashy cadenza, which is the soloist’s first entry, lacks impact. In the Fanfare Archive Leslie Gerber greeted the original release of this rarity in 1990 by saying that despite Richter’s large-scale interpretation and ferocious energy, the inferior sound made the recording attractive basically to completists Now, as the proprietor of Parnassus, he’s in a position to make the Ravel available again, but I agree that only completists and the curious are likely to be tempted.

In 1988 Richter made a single appearance playing the solo piano part in Scriabin’s Prometheus, which he had first taken up in 1972. The occasion was the centennial of the birth of his great piano teacher, Heinrich Neuhaus. That reading has had some circulation, but not the one from 1972, as heard here. Previously this recording was only available on a CD-R in Russia. Richter is in prime form. With Svetlanov as conductor, there is an equal partnership, and the spectacular side of Richter’s playing comes through in full force. The recorded sound is decent considering the broadcast source. Richter is miked closely, giving us ample scope for hearing his acknowledged supremacy as probably the best Scriabin pianist of the century, a place only Horowitz vies for, to my mind. I find Scriabin’s orchestral writing luxuriant, rhapsodic, and rather baggy, but every bar is captivating when Richter is playing. Expect some bobbles in the orchestral part, however.

The only Strauss that Richter ever played was Burleske, but I hadn’t heard either of his two live versions, under Rozhdestvensky in December, 1961 or the much rarer Bucharest performance included here, under Romanian conductor George Georgescu from September of the same year—it was released only on a Romanian label. The recorded sound, to my surprise, is vivid, full, and natural. Musically the performance fires on all cylinders. Pianists who have the technique love playing Burleske as a virtuoso romp; Richter makes every difficulty sound effortless. His brio is infectious, and one actually feels that the piece is light-hearted, which isn’t usually the case.

Taken altogether, the positives far outweigh the negatives of this new release. Even discounting the dim-sounding Ravel Concerto, the other performances are more than enough to carry the day. Richter is acknowledged to have had the largest repertoire of any pianist (or as another pianist conceded, “He plays everything.”) The works on this disc exist at distant outposts of the Richter domain, yet that makes them all the more cherishable. Huntley Dent

Parnassus CDs are distributed in the U.S. by Alliance and elsewhere by alto distribution and associated distributors..