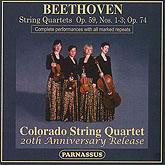 These performance include all repeats marked by Beethoven in his scores, extending their playing time so that the four works are on two well-filled discs (74:20 & 71:08).

The new recording marks the recorded debut of violist Marka Gustavsson with the Colorado Quartet. Gustavsson, who studied at Indiana University with Josef Gingold, will soon receive her doctorate from the City University of New York. She divides her time between New York and New Haven, where her husband John Halle teaches composition at Yale University.

Since 2000 the Colorado Quartet has been Quartet-in-Residence at Bard College, where it gives frequent performances in addition to its touring schedule. The Quartet is also a regular ensemble at the Mostly Mozart Festival. It has often performed complete cycles of the Beethoven Quartets, including one in Berlin in the Fall of 2001.

Critical plaudits for previous recordings of the Colorado Quartet:

This article originally appeared in Issue 27:3 (Jan/Feb 2004) of Fanfare Magazine.
I was prepared to damn the Colorado Quartet’s Beethoven with faint praise, at least through three hearings of the set. My initial reactions were modestly positive: It is a finely balanced ensemble that plays with virtuosity and panache and is heard here in a cleanly recorded ambiance. I was impressed by the honesty and musicianship of the group, as well as by its straightforward and satisfying way with the music. Things became more complex when I listened to favorite recordings of this literature by the immortal Budapest Quartet as well as the recent Emerson Quartet cycle, and remembered with fondness the Vienna Konzerthaus Quartet recordings, now no longer available. Good as this Parnassus recording is, the Colorado players fall somewhat short of the mark set by their great predecessors, and in the case of the Emersons, their contemporaries.

I missed, for example, the symphonic weight and line that the Budapest brings to the opening phrase of the first “Razumovsky“ Quartet. At the same time, I enjoyed much of the Colorado’s soft playing, as well as its expressive use of vibrato, minimally in one of the development’s piano sections. Where the Colorado disappoints is by understatement in some of the music’s big moments, for example, the climactic point in the F-Major Quartet when Beethoven restates the opening theme near the first movement’s conclusion, fortissimo with sforzandos on the second and fourth beat. Both the Budapest and Emerson come closer to the composer’s indication Adagio molto e mesto—very slowly and sad—in the same quartet’s second movement than do the Colorado musicians.

Their lighter touch pays musical dividends in the Allegretto of op. 59/2. This quartet’s opening moments sound purposefully unsettled till the Coloradoans unleash a whirlwind of dazzling 16th notes. There are numerous remarkable instances of brilliant ensemble throughout the set—testimony to their 30 years of concertizing together—but one moment in particular caught my attention: a particularly beautiful poco ritard in the second “Razumovsky“’s first movement, when the cello’s three 16th notes hold slightly back, awaiting a perfect return to tempo. More than in the op. 59/1 ‘s slow movement, the Colorado Quartet finds the right balance of feeling and dignity in this quartet’s Adagio. Others have played the movement more slowly and perhaps with feeling that is more overt, but the depth of the Colorado Quartet’s expression is never in doubt.

I particularly enjoyed their songful performance of the op. 59/3 Quartet’s Andante con moto, conceived lyrically with a gentle and buoyant swing. The Allegro molto holds no terror for these musicians who deliver an effortless sounding performance.
The classical virtues of the op. 74 Quartet fit nicely with the Colorado Quartet’s approach, exemplified early on in the light and airy pizzicatos in the opening movement. I’m not sure that all the repeats of the Variations are necessary, but they don’t overstay their welcome in this fine performance.

This recording deserves a recommendation, especially to the Colorado Quartet’s many fans, but as much as I enjoyed it, the Emerson cycle remains a solid first choice among modern recordings, and good as the sonics are on the Parnassus set, DG offers sound with a warmth that is perfectly in tune with the Emerson’s performance. Nevertheless, if you, like me, consider the Beethoven quartets to reside somewhere near the heart of the essential repertoire, you’ll want multiple recordings and might want to include the Colorado recording in your collection.
Michael Fine