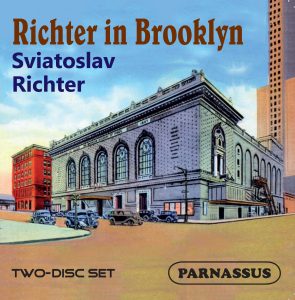 Parnassus CDs are distributed in the U.S. by Alliance, in Italy by La Tosca, and elsewhere by alto distribution and associated distributors.

Complete notes from the booklet:
Sviatoslav Richter made a tour of Canada in September and October of 1964. He played first in Montreal (the 23rd and 24th, different programs), then in Toronto (the 28th). He gave concerts in most of Canada’s major cities, concluding the tour on October 28 in Victoria. A plan to go next to Mexico did not come off, and he returned to Europe where he began a series of concerts in France on November 24. He then came back to North America in April, where he began a U.S. tour in Baltimore on April 9. He traveled across America until June 8, when he concluded the tour in San Francisco.

Richter’s two concerts at Carnegie Hall sold out so rapidly that his management, S. Hurok, wanted to add another date. Carnegie was not available, so Hurok booked Richter into the Brooklyn Academy of Music, where he performed on April 22. The venue has been mis-labelled “Brooklyn Opera House;” it is actually the Opera House of the Brooklyn Academy of Music (now the Howard Gilman Opera House). The BAM organization began operations in 1861 and moved into its current home, the Peter Jay Sharp Building, in 1908, opening with a performance highlighted by Enrico Caruso and Geraldine Farrar. The Opera House has 2109 seats, which also sold very quickly for the Richter concert, I remember well. After hearing the concert of April 15 at Carnegie Hall, I rushed to buy a ticket for the Brooklyn concert, which duplicated only one item (Prokofiev’s Second Sonata) from the Carnegie Hall concerts. My ticket must
have been one of the last remaining, as I sat in the last row of the balcony.

It’s said that Richter played more encores when he was dissatisfied with a performance, fewer or none when he was satisfied. He must have been at least fairly satisfied with his Brooklyn concert, as he played only three encores, a modest response to the typically thunderous reception of the audience.

This performance of Mendelssohn Variations sérieuses has been issued by several labels, and two of the encores (Rachmaninov and Alborada) were issued as a collection of encores by various pianists on the obscure Legato label. However, the remaining material has never before been published.

This is the first time Parnassus has published a Richter recording made from the audience. In the 1960s, live performance recordings made from the audiences of major concert and opera venues, were widely available in New York, particularly through a business called Music Masters. That shop, on West 43rd St., stocked a very wide inventory of LPs, mostly classical and musical comedy. It was also known as the place to get a recording of the concert you had just enjoyed so much. The proprietor of the store,
the late Willie Lerner, had several employees who recorded concerts for him, especially Roger Frank (who also had his own bootleg LP label) and another man, still living, who was known as Wireless Mike. They bought excellent seats, as close to the stage as possible, and used the best available equipment, including Uher tape recorders. Their recordings were surprisingly good in quality most of the time, although nearby noises like coughs and movements of the microphone inside a coat sleeve were exaggeratedly loud. Willie’s recordists had learned to keep very still while recording a concert, but they couldn’t suppress others’ coughs.

The quality of this recording is entirely listenable. Cough noises, which could not be entirely eliminated, have been greatly reduced by electronic means. We are now able to hear, for the first time since 1965, this superb concert in its entirety.

The music content of this concert was far too long for a single CD. In order to fill the second disc, we have chosen a performance of Richter playing music from Brooklyn: the Gershwin Piano Concerto in F. It is typical of Richter’s wide-ranging interests and curiosities that he chose this music as one of the last works he added to his repertoire.
It was one of two American works he ever played. (Unfortunately, no recording of his playing the Copland Piano Quartet, which he performed twice, has ever surfaced.)

Richter first played the Gershwin Concerto in Schwetzingen on May 30, 1993. He then played it three more times with the present orchestra and conductor, during a series of five concerts they performed in France. These four performances were the only ones he ever gave of the Gershwin Concerto. The first performance of Richter playing this music has been widely available. It is fascinating to hear, but the present recording seems to us more idiomatic and a great delight. Apparently Richter and the conductor
and orchestra quickly worked their way into Gershwin’s style.