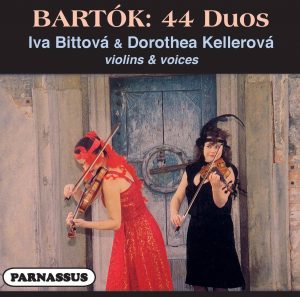 Forty Four Duos for Violin: Stories from a Clear Spring

There was an old couple. They had nine beautiful sons who were always hunting in the forest, the only passion of theirs. But one day they got lost in a deep dark wood and they turned into nine stags.

The father sought high and low to find them and when lo he did, he called in vain. Never again did they want to leave the forest.

…Their lips not from a glass, but only from a clear spring will drink.” Thus ends Bartók’s “Cantata Profana,” based on the text of a Rumanian kolinda, an old folk ballad about the nine magical stags.

Gavin: I’m not quite sure how to write the head note: Both artists sing, and both play.

You’ve read the head note: violins and voices. Purists need read no further. Bartók’s 44 Duos were written as etudes also intended for performance, but they are songs and dances, too, each based on one of the recordings of folk music that Bartók and Kodály made in the early 1900s. Recordings have included an arrangement for two violas; Jerry Dubins and I approved (Fanfare 38:2), Lynn René Bayley did not. Some recordings have presented the 44 Duos in Bartók’s order, which more or less goes from easy to difficult; others have mixed them to achieve greater variety from piece to piece. In the feature article in 38:2, one of the artists states: “We discovered several [duos] had been arranged as piano pieces and recorded by Bartók. We listened to these for inspiration, and found that he strayed from his own markings in the music and ‘jazzed them up’ to sound more folk-like.” All of that history bears on the present release.

Iva Bittová is a Czech composer, violinist, singer, and actor (she has starred in several Czech films); all of those talents are brought to bear for Bartók’s 44 Duos. She and her colleague Dorothea Kellerová add a new level of ‘jazzed them up’ by singing as well as playing violins. They choose their own order; they begin with No. 1 “Teasing Song” Párosító, but they play it pizzicato. In third position is No. 44 “Transylvanian Dance”; they follow the score but add a distinct, colorful, Israeli horah flavor. Half way through the dance, they sing the violin parts for a while as well as playing them. Bittová’s voice could be described as a mezzo, Kellerová’s a soprano. Sometimes they sing together, sometimes a single voice is accompanied by either one or two violins. One duo, No. 25 Magyar Nóta, is entirely vocal. The voices can be forward, dominating the violins, or distant, the slightest accompaniment. The singing is basically vocalise, but I think they slip in a word or two. The music is all here, in one form or another (instrumental and/or vocal). Scattered among the 44 Duos are three improvisations and a purely vocal epilogue; they lack Bartók’s intensity but fit in nicely. Several of the duos are played straight, with no vocal, some juiced up, others not. In these, it becomes apparent that Bittová and Kellerová are superb violinists, producing a great variety of warm, colorful tones; I know of no other recording of Bartók’s Duos in which the violin playing is so exciting (Itzhak Perlman and Pinchas Zukerman are too smooth, too elegant for this folk-inspired music, as are many other duos).

These recordings were made in the Czech Republic in 1996; they were issued on a local label in 1997, but this is their first wider public exposure. The recorded sound is excellent, in the warm, reverberant acoustic of Zelená Hora, a Moravian church, and at Studio Viktorin, which I am unable to identify. Each duo receives its own track.

In much of his music, including the 44 Duos, Bartók turned folk music into classical; Bittová and Kellerová swing the pendulum half way back. This is one of those performances about which one would love to hear what the composer has to say. For Bartók, perhaps the added “folk” flavor might be somewhat ersatz, not the real thing. Whatever he might think, I am charmed … enthralled … addicted.
James H. North

This article originally appeared in Issue 44:1 (Sept/Oct 2020) of Fanfare Magazine.