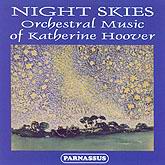 Katherine Hoover, born in West Virginia in 1937, is a successful flutist and composer. More than a dozen of her compositions have been recorded, several more than once (and her Kokopeli for solo flute at least four times). However. there has never been an entire LP or CD devoted entirely to her music until now. Intellectually stimulating yet accessible, Hoover’s music has been very popular with audiences outside “new music” circles.

Night Skies includes four orchestral works of Hoover’s, all first performed since 1987. Three of them -Two Sketches, Eleni: A Greek Tragedy, and the title work–are performed by the Slovak Radio Symphony orchestra under the direction of American conductor Joel Eric Suben. In Eleni the vocal soloist is mezzo-soprano Denisa Danielova. These recordings were supervised by the composer. The Double Concerto is played by a U.S. orchestra making its recording debut: the Wisconsin Philharmonia, conducted by Vartan Manoogian, with violin soloists David Perry and Suzanne Beia.

Night Skies was inspired by the famous Henri-Edmond Cross painting, now in the Metropolitan Museum of Art. That painting, reproduced with the permission and assistance of the Museum, makes for most appropriate and impressive cover art. All of these compositions have been peformed successfully in the U.S. to critical and audience acclaim

Night Skies: “Hoover’s music mixes elements of old and new, in a masterful blending of old and new into a cohesive whole.” –Harrisburg Patriot-News

Slovak Radio Symphony Orchestra recordings were supervised by the composer

This article originally appeared in Issue 22:5 (May/June 1999) of Fanfare Magazine.
Female composers have had a hard time of it in Western musical culture. They’ve been traditionally depicted as mere ancillaries to their legitimately ordained male counterparts. Katherine Hoover, already fairly well represented on the Leonarda label, may strike some of you as a grudgingly ordained female composer.

Make no mistake; she’s a composer.

Her language is post-Wagner, post-Webern, post-whatever … a catchall label that has been forwarded to define music that’s difficult and beyond the ken of so-called normal commercial audiences. She is decidedly not a late-20th-century neo-Romantic hoping to cull record sales through a language that has been ripped off from Rachmaninov, Puccini, and their followers. Her music is at once forbiddingly stringent and uncompromising, demanding our utmost attention and concentration in order to succeed. She’s also tunefully virtuosic in the same way that Haydn was—able to make her language relate to ours, whatever its musical shortcomings.

Katherine Hoover was born in West Virginia and now resides in New York. Educated at the Eastman School, she is a flutist with the rare credential of having been tutored by the legendary William Kincaid of the Philadelphia Orchestra. She is recipient of a 1979 National Endowment Composer’s Fellowship. So what? She has been anointed along with thousands of others. Why should we possibly pay attention to her music? Because it’s inventive and, in the final analysis, compelling in its own language and on its own terms. She has a gift for theater, and shows it in its most elemental and unadorned form. In these pieces, her methodology is decidedly modern. She proves to be a transcendentally compelling voice that bends the rules in the direction of pure affect. . . and one that ought to be heard. Eleni: A Greek Tragedy is told from a woman victim’s point of view, but one that’s universalized through Hoover’s language.

The other pieces on this release show her prowess in dealing with tonalism stretched, but not broken. Two Sketches (1989) opens with aphoristic flute motives—they are two deftly crafted tone poems that run the gamut between purely lyrical tonalism and the most arcane and studied structuralism. She picks and chooses, and selects whatever will serve her purposes best. The Double Concerto celebrates Neoclassicism, but with melodic and harmonic turns that conjure up shades of late Shostakovich and Schnittke. It’s a brilliantly conceived and quite sad work that makes short moments of silence and sound equally telling. As for the final piece, Night Skies, an extended and timelessly Impressionistic symphonic poem with augmented percussion, go discover it for yourself.

In all cases, these performances, captured in technically impeccable sound, make a strong and most satisfying case. William Zagorski

Amazon.com review:
A hint of Morton Feldman atmospherics, a taste of klezmer, a tone poem–it can all be found in the diverse output of American composer Katherine Hoover. And on Night Skies, the Slovak Radio Symphony under Joel Eric Suben performs a fascinating cross-section of her works. “Turnabout,” one-half of Two Sketches, is a sonic palindrome in which the orchestra literally turns around and plays the short piece backward. Eleni: A Greek Tragedy is apparently where the klezmer comes in; its layerings of Greek melodies and spiky orchestrations create a moving lament. The title track is an orchestral tone poem where percussion and flute create a storm to remember. The flute is given prominence in many of Hoover’s works (she’s also a flutist), but the variety of her output on Night Skies is what’s really astounding. These pieces brim with inventiveness and energy. —Jason Verlinde

Parnassus Records CDs and DVDs are distributed in the U.S. by E One, in Italy by La Tosca, elsewhere by alto Distribution and associated companies. If you cannot find our CDs and DVDs, please contact us.