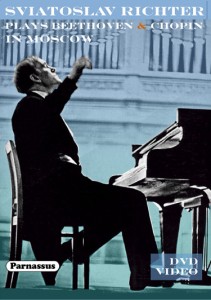 For our first DVD, Parnassus presents live performances of Sviatoslav Richter never before available in the West. These videos, filmed at the Great Hall of the Moscow Conservatory in October of 1976, show Richter in his prime playing as a soloist in front of an audience.

The Beethoven program includes the Sonatas Nos. 1, 7, 9, and 12, and the Bagatelle, Op. 126, No. 1, played as an encore. The First Sonata was performed on October 10, the remainder on October 15. However the October 15 program also opened with the First Sonata so it is essentially complete.

The remainder of the disc includes Chopin performances from October 15, including the Polonaise-Fantaisie, the Scherzo No. 4, two Waltzes, four Mazurkas, and the Etude Op. 25 No. 7.

The video quality of these recordings is limited by the characteristics of Soviet film stock, resulting in a somewhat grainy image. They have been carefully remastered from the best available sources. The sound quality is fine, in stereo throughout.

Few videos of Richter have been issued, and most of those available show Richter in his later years. This release is the only full-length program of Richter from the 1970s issued on DVD.

There are performances from two filmed recitals in this two hour DVD. The first was given in Moscow on 10 October 1976, from which come Beethoven’s Op.2 No.1 sonata and all the Chopin pieces. Five days later Richter performed the remainder of the Beethoven items.

The concerts took place at the Great Hall of the Moscow Conservatory. There are three large microphones on stands in front of Richter, directly in front of the stalls, and several cameras placed throughout the auditorium. I couldn’t work out where one of the back-of-stage cameras could possibly be, as it’s not visible during front-on shots, so maybe other shots were included, or maybe there was some first rate camera camouflage in the Great Hall that day.

Parnassus makes clear that the video quality is ‘limited by Soviet technology of the time’. I would add that the footage looks as if it’s been taped on video from television transmission. The colour is rather grainy and lacks the kind of definition expected today. It’s also flecked with tiny VHS detritus familiar if one runs one’s own videos from that time. It’s not terrible, but prospective viewers should be aware that the tape is getting on for forty years old now. The sound quality is certainly pretty reasonable.

For the 10 October concert Richter was dressed in a sober blue suit. If the recording quality had been better the contrast between his suit and the parquet flooring of the Great Hall might have been stronger. But we can enjoy crisp Beethoven performances, with an especially enjoyable cantabile in the slow movement of Op. 2 No.1 (a sonata Parnassus habitually attributes, here and elsewhere, to Op.1). The vision is touch darker but the sound is just a touch more stabilised and focused on 15 October so the other Beethoven sonatas can be heard a touch better. Here Richter wears a bow tie. The camera shots, some of which, like the panning auditorium ones, are a bit crude, nevertheless allow one access to some of the pianist’s range of facial gestures, including the familiar Richter shrug and gurn. The playing is crisp, forthright accenting in the left hand setting up energy and dynamism. His Chopin recital is of lighter material, Waltzes and Mazurkas, all of which are played with commitment and energy. The Waltz in F, Op.34 No.3 goes like the clappers, whilst the Mazurka in E flat minor, Op.63 No.3, lilts rather more convincingly.

Clearly, this is a specialist release for Richter adherents, but they will encounter admirable performances in decent sound and tolerable vision.

Parnassus Records classical CDs are distributed in the U.S. by Alliance and elsewhere by alto distribution and associated companies. If you cannot find them at your favourite record store, please ask for them and please take a moment to email us