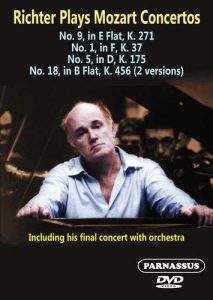 Richter was not particularly noted as a Mozartean, but he should have been. He played a wide repertoire of Mozart’s music, including more than half of the Piano Concertos.

CDs of his playing of all these Concertos have been previously released, but these videos have never been commercially released. They span almost three decades of Richter’s career, from the early Concerto No. 9 with Maazel to the three Concertos performed in one concert in Tokyo which was his last performance with orchestra. (A previous audio release described it as his last concert, which is incorrect.) A bonus repeat version of No. 18 has been included. If nothing else, it demonstrates that Richter’s powers were undiminished in the 1994 performance.

This article originally appeared in Issue 43:1 (Sept/Oct 2019) of Fanfare Magazine.
Since Sviatoslav Richter more or less played everything, it shouldn’t be surprising to find in his discography (I consulted Recorded Richter, compiled by Ateş Tanin—it is free and easily found online) that he can be heard in 13 of Mozart’s piano concertos and 10 of his piano sonatas. But I don’t think of Richter for Mozart and often wonder how attuned he was to this composer. The present release comprises three separate television broadcasts, where his performances only underscore my doubts. Since they span nearly 30 years, from 1966 in Tours to 1994 in Tokyo, one expects changes in Richter’s playing, which turn out to be fairly dramatic.

To begin with the most problematic broadcast, Richter was four days shy of his 79th birthday when he performed three concertos under Rudolf Barshai in Tokyo in March 1994. As was his custom late in life, he uses a score and glues his eyes to it. This and his advanced age probably account for the stiffness and caution in Richter’s playing. Two early concertos, No. 1 and No. 5, appear only once in his discography, and there’s not much to be gained from them. Reviewing the only previous release, a CD on the Laurel label, Peter J. Rabinowitz was decidedly unhappy. He found the playing “surprisingly stern, sometimes even hard-hearted. Thus, while the program imaginatively spans Mozart’s development, moving from one of his concerto-pastiches through his first fully original piano concerto on to one of the masterpieces of his maturity, Richter minimizes the stylistic differences by elbowing through all three works in much the same unsmiling, hard-accented manner.” (Fanfare 21:6)

I might soften this judgment by saying that Richter is merely straightforward and uninteresting, but in either case he isn’t anywhere near his best. That’s a shame because the stereo sound, Rudolf Barshai’s conducting, and the video image are the best to be found on this DVD. To show what is missing, the second reading of Concerto No. 18, from 1977 with Kondrashin and the Moscow State Symphony, displays Richter’s customary imagination and musical presence. But the fuzzy color image and mono sound aren’t inviting.

That leaves the 1966 reading of Concerto No. 9 under Maazel. This is one of five live recordings we have of Richter in this piece, the last being among his final appearances with an orchestra, in April 1994, a month after the Tokyo broadcast. The black-and-white image is fuzzy but fairly watchable, and the mono sound is full enough to be listenable. Just three years earlier, searching for a festival location in the Loire Valley, Richter had chosen La Grange de Meslay, close to Tours. His summer festival became an annual event, and here he’s in fine form. With sympathetic conducting by the young Maazel and good orchestral playing, we finally hit upon prime Richter in a concerto he never recorded commercially.

Although you could approach this video as a survey of Mozart’s musical growth from very early on, it’s really more about Richter’s aging process. Only Concerto No. 9 combines reasonably good sound and a high level of musicianship, so if that is enough to satisfy, I can recommend this release. Parnassus has made invaluable contributions to the discography of live Richter concerts, and even a mixed bag like this one is very welcome to collectors. Huntley Dent

Parnassus CDs and DVDs are distributed in the U.S. by Alliance, and elsewhere by alto distribution and associated distributors.