Richter in Warsaw: The Scriabin Recital 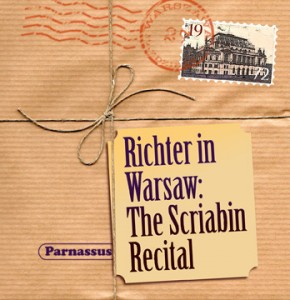 Buy Richter in Warsaw: The Scriabin Recital via Amazon (CD or MP3)

In 1972, Sviatoslav Richter chose to commemorate the 100th anniversary of the birth of Alexander Scriabin by performing an all-Scriabin program in three locations. These concerts, while not quite unique, were very uncommon events in Richter’s career. He did not often give concerts devoted to a single composer. Although he played Scriabin’s music throughout his career, concerts devoted entirely to that composer were very scarce; he performed them in public only in 1945, 1957, and in 1972.

The music of Scriabin was ideal for Richter’s qualities as a pianist. In this recording, we hear Richter’s singing and varied tone, his extraordinary technical facility, and his extremely wide range of dynamics and expression. The recital, offered complete, is fortunately preserved in fine, clear mono sound.

This recording has been previously issued but has never had good accessibility to international audiences. Its original Italian edition was not widely distributed; a reissue was suppressed quickly after publication. It has not been available in any form for well over a decade. Parnassus is pleased to continue its devotion to Richter’s art by making this splendid disc available again.

Trivia note: the building depicted on the mock postage stamp on the booklet front and tray card is the Philharmony in Warsaw, where this concert took place.