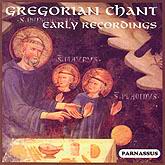 Most early recordings of Gregorian Chant, with the exception of those from Solesmes, have fallen into total obscurity. Now, Parnassus resurrects more than 2 ½ hours of recordings made from 1928 to 1936 at a variety of locations throughout Europe. Only two of these items have ever been previously available on LP, and none on CD.

To make the anthology as useful and informative as possible, compiler Jerome F. Weber has provided a lengthy discussion of the styles and backgrounds of all of the performing choirs, along with complete texts and translations of the Chants. The transfers from scarce 78s have been done by the legendary engineer Richard Burns, co-inventor of the Packburn Transient Noise Suppressor.

The result is a highly listenable, fascinating compilation that will capture the interest of any Chant lover.

This article originally appeared in Issue 22:5 (May/June 1999) of Fanfare Magazine.
This two-disc set presents historical recordings of chant made between 1928 and 1936 by a broad Spectrum of ensembles, many, though not all, monastic. The recordings show clearly how close chant was to the other musical currents of the day. The average listener probably envisions Gregorian chant as a tradition set apart, kept pristine by cloistered monks, untainted by the world, like a special liqueur sweetening the austerities of monastic life. Only a few of the tracks here seem to have that special character, most particularly the opening chants recorded by the Choir of the Benedictine College of Sant’Anselmo in 1933 or thereabouts. The resonant acoustic adds a halo to what is already expressive and technically accomplished singing, beautifully tuned, and with superb ensemble. Few of the other choirs heard here can match this standard. Quite prominent elsewhere is the vibrato common in mid-century singing (which produced such a counterreaction among the partisans of the early-music revival), heard both in the monastic choir of St. Lawrence Abbey, Ampleforth, and in the conservatory choir of the Schola Cantorum of Paris (both recorded 1930). Setting a bad example is the surprisingly poor singing on the tracks supervised by musicologist Curt Sachs for a historical anthology. All of the second CD documents a practice that has completely fallen out of practice, that of organ-accompanied chant (something reflected in the choral chant settings of French composers, which still have a place in the repertoire).

The superb notes are provided by colleague Jerome F. Weber, and the release has complete texts and translations. The sound is surprisingly good given the date of the recordings. I don’t think this collection will be a crossover hit for those whom chant is simply background music, but it’s a fascinating journey into the past, and belongs in every music-history collection. Recommended.
Tom Moore

Gregorian Chant: The Early Recordings: Goldberg Magazine review
What a wonderful treat it is today to be able to listen to these pioneer performances of monody! This interesting selection, put together by Jerome Weber, who is well-acquainted with the world of phonographic recordings of Gregorian Chant,has an important his torical role. The pieces are witnesses in sound to the schools which, after. Pope Pious X’s Motu Propio, adopted this type of chant for their liturgical ceremonies, using a style more or less borrowed from Solesmes. We find here all kinds of performances by both monastic and secular choirs, by those associated with religious centers and by those associated only with conservatories or music schools, a capella perfor mances and performances accompanied by organ, as was highly fashionable at the beginning of the century (producing some curious harmonies!), sung by male, female, and even children’s choirs — as is the case in the performance by the Montserrat choir school, recorded in 1930 under the direction of the legendary David Pujol.

It is amazing how much aesthetic tastes have changed! Current recordings, in many ways more stark and purified, are sometimes colder than these versions. While it is true that in most cases the perfomances are quite slow, on occasion, the lively rhythm which some choirs transmit to these chant pieces surprises, for example in the versions by the Schola Cantorum of Paris, directed by Amedee Gastoue, one of the fathers of the study monophonic music on this century. Just seeing the name of the famous Justine B. Ward, who directs the choir of the Pious X Music School, immediately reminds us of another: Andre Mocquereau, without whose work these versions would have been impossible. Suitable only for lovers of the Gregorian repertoire.
-JUAN CARLOS ASENSIO
Goldberg Magazine – November 1999

Review courtesy amazon.com:
Are there recorded performances of such historic or musicological value that we should forgive their very poor sound? The answer probably is yes, but it’s up to each listener to determine his or her own tolerance for scratches, hiss, and distortion as part of a listening experience. This two-disc Gregorian chant compilation, taken from historic recordings made between 1928 and 1936, will challenge most listeners accustomed to today’s well-engineered recordings. High levels of hiss and varying degrees of scratches and distortion go with the territory here. Considerable effort was made to improve the sonic environment, but obviously the source material, transferred from long-forgotten 78s, was in pretty rough shape. These are discs for only the most avid chant recording completists and for musicologists looking for traces of chant singing style that reach far back into the 19th century–the collection’s most worthy asset. Most of the choirs represented–primarily from European monasteries, schools, and cathedrals–have centuries-old chant traditions, including Salzburg’s famous Nonnberg Abbey. The 75 tracks feature chant performances that range from the Solesmes style to accompanied variants from Beuron and Montserrat. In addition to the value of hearing various singing styles, we also hear many chants not available on other recordings. The liner notes are informative and extensive, with complete texts and translations. –David Vernier

Parnassus Records CDs and DVDs are distributed in the U.S. by E One, in Italy by La Tosca, elsewhere by alto Distribution and associated companies. If you cannot find our CDs and DVDs, please contact us.