Tom McDermott – All The Keys And Then Some 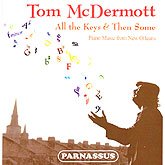 Download Tom McDermott – All The Keys And Then Some from iTunes

PACD 96041 Parnassus Records is pleased to announce the reissue of a unique project: “All the Keys and Then Some” by New Orleans pianist/composer Tom McDermott.

Including 38 tracks and clocking in at 72 minutes, the disc is comprised of two suites. “All the Keys” is a cycle of 24 pieces for solo piano in the all the major and minor keys and has elements of klezmer, tango, boogie-woogie, rag, New Orleans R&B, Chopinesque waltz, Brazilian choro and forms not so easily described. “Some Friends of Mine” is a set of 14 portraits of friends from New Orleans and St. Louis, composed for piano or Kurzweil synthesizer.

This disc came out initially in l995 on New Orleans’ STR label. “Over the years,” explains Tom, “I have been aggressive about getting it in the hands of some of my music idols, and I’ve had wonderfully positive feedback from a motley crew of talented musicians: William Bolcom, Ivan Lins, Leon Redbone, George Winston, Ellis Marsalis, Van Dyke Parks, Harry Shearer, Dick Hyman and others.”

McDermott was born in St. Louis in l957 and moved to New Orleans in l984. In the Crescent City he has made his living playing traditional jazz; in this capacity he has played on four continents and at Carnegie Hall. He has also over the last decade developed a passion for Brazilian music, and in 2005 released “Choro do Norte,” a New Orleans/Brazilian fusion album that was hailed as “excellent” by the New York Times’ Ben Ratliff. Tom has also received superb reviews in Downbeat, Le Monde, the Los Angeles Times and other journals of note.

“All the Keys” was used extensively as background “button” music for NPR’s “All Things Considered,” and its opening track, “Klezmer Nuthouse,” was used on the first compilation of that show’s record spinoff, “All Songs Considered.” “I’m very proud of this record,” says Tom, “because it’s a world unto itself. It’s eclecticism encompasses a huge variety of moods. It’s dense, but accessible. I am so pleased that Parnassus is giving it a chance to reach a wider audience.”

More information on Tom McDermott and his extensive discography can be found at:
http://www.strdigital.com/mcDermott.htm

Download Tom McDermott – All The Keys And Then Some from iTunes